Until February 24, 2022 44-year-old Yulii (the name is changed for security reasons) lived in Berdiansk, on the shores of the Sea of Azov, was engaged in beekeeping and horse breeding, and also gathered herbs. Such connoisseurs are called znakhars (quacks) here.

When the occupation forces of Russia captured his hometown at the end of February, he decided to flee. It took a month to cover 200 km to the nearest free regional center, Zaporizhzhia.

“I left the city on a moped. I had been living in the fields and strips of wood of Berdiansk and Prymorskyi districts for a month,” The man tells. “When I found where the enemy tanks were located, I called the Ukrainian services and reported.”

He recalls how in February there were two petrol tankers between Marynivka and Viacheslavivka, and he and his friend crawled under them and cut all the wires, grabbed the fuel hose and ran into the field.

“Suddenly we saw that a car was coming at us from one side and an armored personnel carrier from the other. We hid behind fir-trees. I remember how I buried my phone so that it would not be found if I were caught,” he said. Fortunately, it did not happen.

When it became dangerous to be in the countryside, Yulii moved to the regional center. Besides, he drove through all the Russian checkpoints with a sticker of the Ukrainian flag on his moped.

Russians tried to peel it off, scraped the surface, but in vain. Yulii recalls one of the conversations:

– Then I will shoot you.

– Shoot, but first answer the question: if I came to your country and told you to remove the tricolor, would you do it?

– I would shoot you.

– And I would have shot you, but it is you who has a rifle in your hands. And there are a lot of you, and I am alone.

(The conversation was translated from Russian)

At the checkpoints a certificate about Yulii’s serious illness came in handy. He told Russians that he was going to the regional cancer center.

“I have a rare disease – pituitary adenoma or brain cancer,” The man says. “I underwent treatment at the presidential clinic in Feofaniia, my friends helped me. I managed to get healed a bit. When I got there, I was already blind, after the operation I was deaf and bald. Doctors gave me half a year and advised me to arrange everything. But I am a herbalist-quack in the third generation, so I “sit” on my own medicines.”

Having reached Zaporizhzhia, Yulii immediately joined the volunteer movement, which was being formed specifically to help people like him, forced migrants.

According to official data, 40 000 people left the temporarily occupied territories in June alone. And on July 22 the head of the Zaporizhzhia Regional Military Administration, Oleksandr Starukh, reported in Telegram that the queue to leave the territories controlled by Russia at the checkpoint in the city of Vasylivka had reached 1 500 cars.

Within half a year that has passed since the start of the full-scale invasion the road to Zaporizhzhia has been given the informal name “the road of life”. The way passes through the city of Vasylivka, the last Russian checkpoint where refugees from Zaporizhzhia and Donetsk regions are kept for at least three to five days. And this happens despite the fact that mostly women, children and older people leave.

“The invaders do not let them pass and use them as a human shield, redeploy equipment and personnel behind their backs,” Starukh emphasized.

Having reached Zaporizhzhia, forced migrants need help. So they are met by Yulii and other volunteers in a large tent with the inscription “Zaporizhzhia City Authorities” near the “Epicenter” shopping center.

Yulii recalls that at first, when he came to the regional administration of social protection of the population, they wanted to send him to live in the district of Pieski (where there is social housing). But he explained that he had to wake up and go to bed in the volunteer town to “send the last one and meet the first one.”

If new migrants arrive at night, Yulii makes sure that they are settled – in a kindergarten, a hostel or in apartments. They must be fed, registered with charity funds and provided with medical assistance and hygiene products if necessary.

Then people are sent on free buses to different cities of Ukraine and abroad. Mainly they head to Lviv. They often go to Kyiv, Ivano-Frankivsk, Odesa and Dnipro as well. If they go abroad, they most often choose Poland, the Czech Republic and Germany, less often – Romania and Spain. Foreign volunteers help organize transportation abroad.

For example, the international rescue organization “Project Dynamo” joined the evacuation of people from the occupied territories, that, according to the volunteer, within two days evacuated about 600 people from Mariupol at the beginning of June.

Yulii himself took out his relatives (parents and brothers with their families) to Poland and tells them every day that he will come soon. But, in fact, he does not plan to leave Ukraine. He says: “What should I do in Poland when there is so much work in Ukraine?!”

At first, free transportation was organized by the initiative of volunteers of the Center. At present 10 buses transport migrants.

“Someone gave a part of their money to buy gasoline, someone had a car or a bus and provided transport services,” Yulii says. “I have a disability pension, two thousand UAH, and social assistance to a migrant, three thousand UAH (it will be paid to me, as a disabled person, until the end of the hostilities). With these five thousand UAH I bought and keep buying medicines and send them to sick granвmothers in Berdiansk.”

On the first days of the rush we received up to 6 000 migrants from Mariupol, Kherson, Berdiansk, Melitopol and Enerhodar. Now orcs do not so intensively allow transport from the occupied territories to pass through. A month ago 200 cars per day were allowed to pass through, now – 50-100 in dry weather,” the volunteer explains.

The weather factor is really important here. At the beginning of August it rained heavily in Vasylivka. “The road of life” was so washed away that rescuers from the Zaporizhzhia Department of the State Emergency Service had to be called. Since then the rescuers have towed about 100 trucks and 450 cars under constant enemy shelling.

There is little sleep in the life of volunteers. Yulii says that sometimes he goes to bed at five a.m., but he gets up already at seven a.m. In the daytime it is possible to take an hour’s nap on the orthopedic mattress in the tent. He spends the rest of his time with people.

Children evacuated from Mariupol remained in his memory forever. They, together with adults, had hid from shelling for several months at the plant “Azovstal”, which remained the last part of the city controlled by Ukraine.

In Ukraine this operation was called “the rescue of the military servicemen” – 300 Ukrainian soldiers had held the defense for almost two months. In mid-May the prisoners of war were taken to the former corrective labor colony in the settlement of Olenivka near Donetsk (controlled by Russian forces), while the civilians were evacuated to peaceful territories of Ukraine and Russia. Many Mariupol residents were brought to the Zaporizhzhia Volunteer Center.

We saw children’s tanned faces. But it was not a tan – layers of dirt! After a long journey they were so exhausted that they just wanted to sleep,” the volunteer recalls.

“Once a tented GAZelle arrived,” Yulii says. “And just imagine: a man, a woman, five children get out of it, and what remains in the car is a large parrot, a cat and someone else cackles… They raise the tent, and there are about 20 chickens, 20 Muscovy ducks there. The medical workers standing nearby joked: “You should have taken the cow with you!”, to which the man replied: “We evacuated the cow first.” Then all this property went to western parts of Ukraine.”

In general, more than 100 thousand people have been evacuated since the Zaporizhzhia Volunteer Center was created. The work continues. 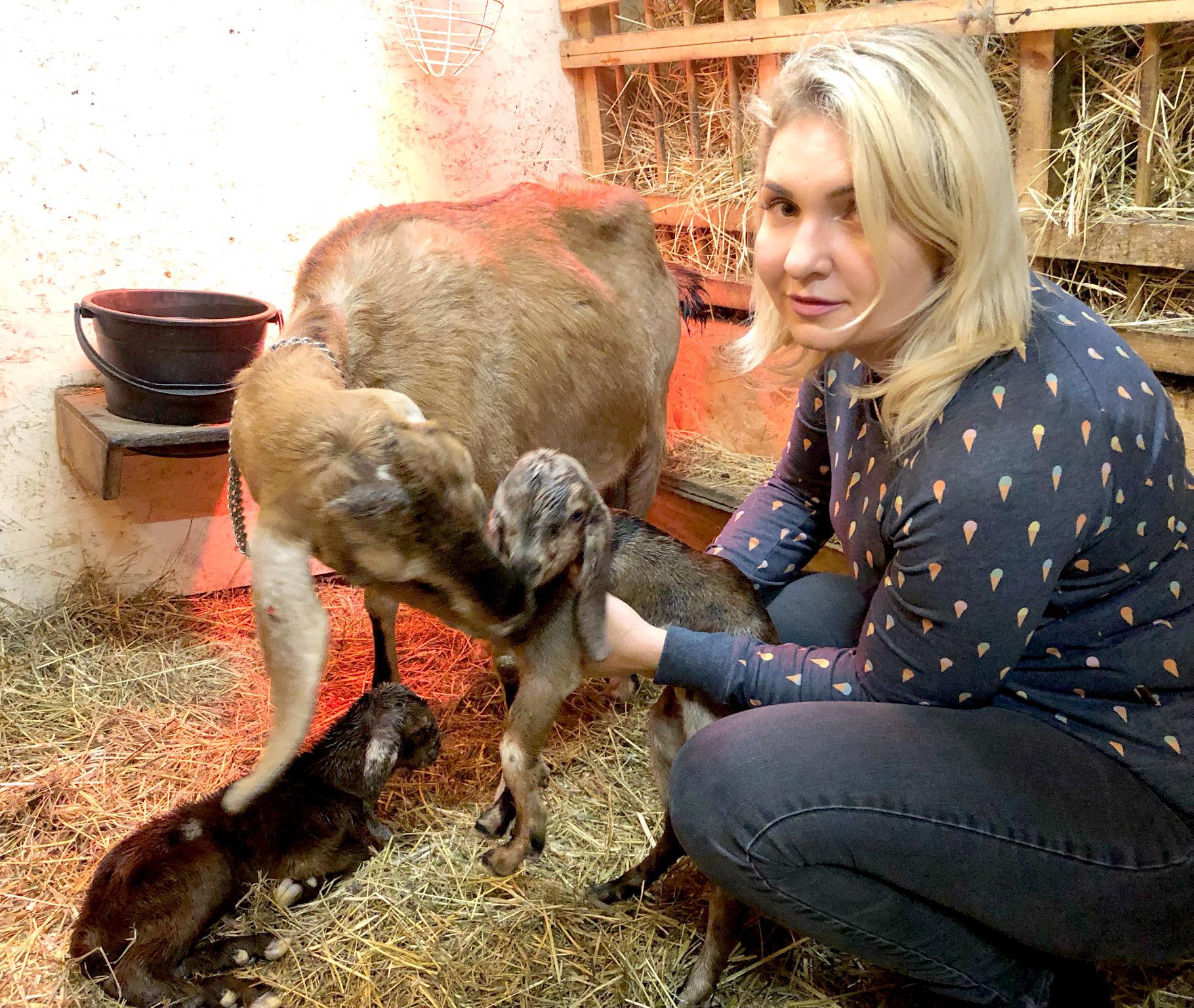