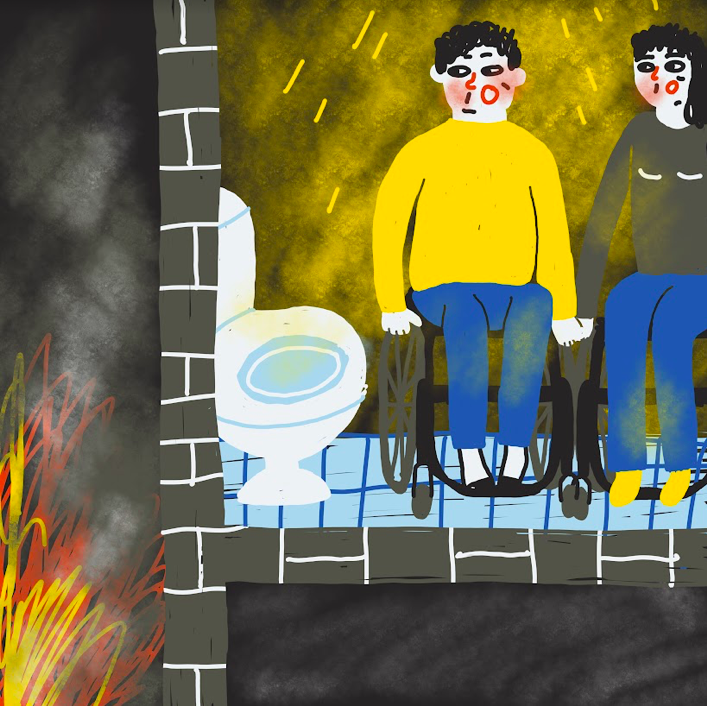 “We are in Bucha (…) The city is experiencing a humanitarian disaster, there is nothing left—no light, no gas, no water or other important things for living for five days now. Thousands of people are sitting in basements, people with disabilities and others who cannot physically leave their homes stay in their apartments. Babies are being born in basements, there is a lack of medicines and other necessities (…) Save ordinary civilian people in Bucha!”

This post appeared on the 33-year-old Vitaly Pcholkin’s Facebook page on March 7. It has been shared tens of thousands of times.

“By some miracle, my neighbors found a spot with an Internet connection and were able to send the message. I don’t know if it made any difference, but something had to be done,” Vitaliy says. People needed humanitarian corridors to get away from the shelling.

He and his wife Ulyana are activists. They work at the organization called Active Rehabilitation Group, which helps people with spinal cord injuries to return to an independent and active life. Both of them use wheelchairs. Vitaliy is paralyzed below the chest because of a neck injury. Ulyana got a spinal fracture at the chest level in a car accident.

The situation in Bucha evolved rapidly. The first two days after Russia’s large-scale invasion of Ukraine, it was still possible to leave the city, but on the third day Bucha was essentially blocked. Russian troops entered the city.

While there was still a cell connection, Vitaliy and Ulyana coordinated the assistance to the locals. The organization looked for medicines, food, and transportation for the wounded. But within days, the connection was cut off, and the shelling intensified.

“When the connection, light and water disappeared, Ulyana and I tried to understand why we didn’t leave at the very beginning. In the first days we did what we always used to do: helped people. That’s why we didn’t think much about evacuation. But we probably overestimated our abilities. We have always been quite self-sufficient and independent, we arranged our life so as not to depend on anyone and act independently. Also, we wanted to stay in the city and be useful at home. But when everything is completely destroyed, you feel all the consequences of disability. In such a situation, it is total helplessness. We could not be useful to ourselves or other people. It was very depressing,” Vitaliy says.

The bomb shelter that was set up at the school was too far away from them. In addition, they had to cross the dangerous Warsaw Highway to get there. The basement where their neighbors were hiding was also inaccessible for Vitaliy and Ulyana.

“There were very steep stairs. And although our neighbors offered to carry us, we understood that this was not a good idea. That’s why we decided to stay in the apartment.”

They hid mostly in the bathroom, because it was the place in their apartment that was the farthest from windows. And when shooting started near their house, they would stay in the corridor. Their neighbors were united. Some of them brought water, some brought food. One of their neighbors, who managed to leave earlier, left them his camping stove. They used it to cook for the whole building. Some neighbors cooked food on a fire outside the building.

​​”You get used to shelling. Two cases were probably the scariest. When a missile hit our house and we felt it shaking. And when shooting started right in our yard. We were sitting in the bathroom and heard automatic gunfire. It felt like the shooting was right in our apartment. We even heard bullets whizzing by. It lasted an hour. And then a fierce silence came,” Vitaliy says.

They had to get out of there, but Vitaliy and Ulyana did not risk breaking through on their own without a green corridor. They packed their suitcases and waited for the right moment. The opportunity came on March 9. That day, someone ran into their yard and told them about evacuation. Everyone was to meet near the city council and there would be buses.

“It was hard to imagine us getting on a bus in wheelchairs. So we decided to join the column by car. And although no-one could say for sure whether it was possible, we packed, got into two cars with our neighbors and our cat Lutik, and headed to the city council,” Vitaliy says.

That day, after waiting for 5 hours, they escaped from the city. As it turned out later, they took an unapproved route.

“We decided we had nothing to lose. The Russians simply won’t be able to shoot all the cars. So we continued driving. On our way we passed through three Russian checkpoints. The soldiers were confused and didn’t know what to do. After they checked the cars they let us drive on.”

They could only relax two days later when they reached Vinnytsia. From there, Vitaliy and Ulyana went to Lviv.

“Spinal cord injury changes your life and the life of your family. The war threatens absolutely everyone. These are incomparable things. But during war, all the problems faced by people with disabilities, which we have been talking about for many years, intensify by dozens of times,” Vitaliy says.

People’s health gets worse immediately. Vitaliy had got nephritis on the first days because the temperature in the apartment was around 12 degrees centigrade, and he had to sit in a wheelchair for 20 hours a day.

“I wore three pairs of socks, two pairs of pants, and three sweaters to keep warm. There were wounds on my legs because I wore so many clothes.”

“If we waited any longer, we would run out of food. And you literally are not able to get up and go look for it. There were problems with accessibility in cities before the war. But when everything is destroyed and the sidewalks are broken, it is just impossible to move on the streets in a wheelchair. Nowadays, most people with disabilities live in inaccessible apartments in houses where there are either no ramps or they are very uncomfortable. On top of this, if there are problems with cell connection, they can’t even get any information about evacuation if they don’t get along with their neighbors. These people are essentially cut off from any escape,” Vitaliy says.

Vitaliy and Ulyana persistently worked on their home in Bucha to make it a barrier-free island of comfort and independence. And that was what eventually helped them escape.

“We used every opportunity to control the process of construction. And when we saw the horrible ramps that were initially installed in the building, we forced the developer to remake them. Now I am terrified to imagine what it would be like if we had an inaccessible apartment. Then I would not be able to go outside, talk to neighbors, and tell them about my needs. I would be left there waiting for a miracle,” he says.

In Lviv, the Active Rehabilitation Group, led by Vitaliy, has set up a coordination center. They receive humanitarian aid and send it to people with spinal cord injuries who have stayed at home, or those who are heading to safe areas. They’ve also launched a hotline that helps people to go abroad.

“We have high spirits and try not to think about what is going to happen next. We hope that we will be able to return home. At the moment, we fill our life with work and do not give up,” Vitaliy says.